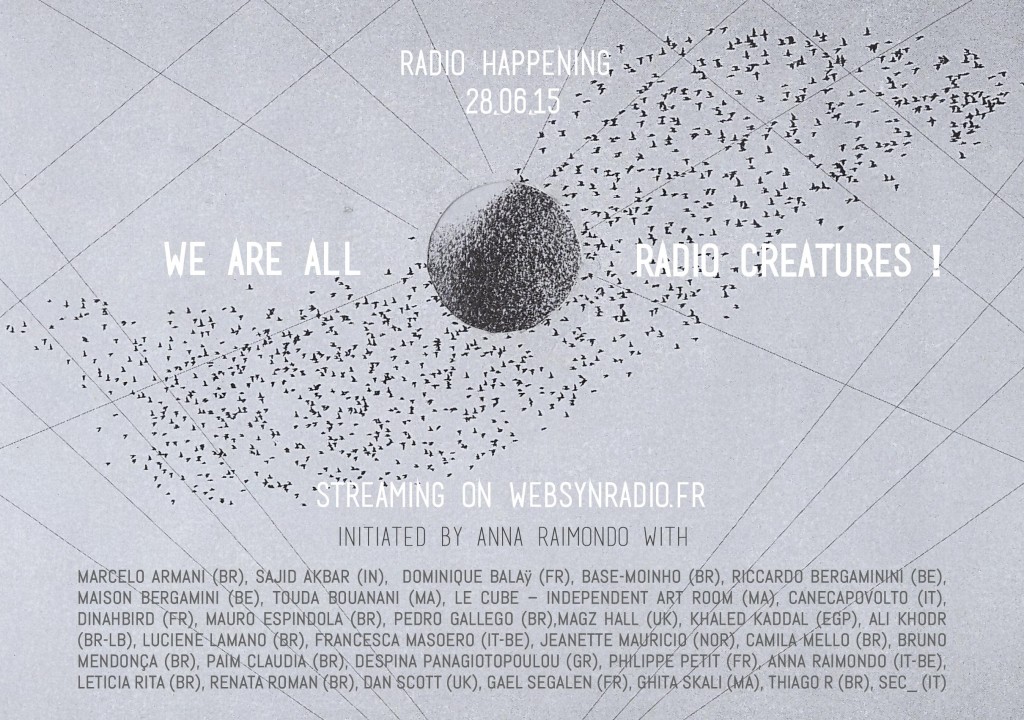 “Arm Wrestling” is formed of a series of itinerant site-specific interventions in which two cassette players, placed opposite each other, perform vocal arm- wrestling in various public spaces in London in 2012. Carrying different political connotations and embodying different degrees of powers, these voices question the limits and the tensions of the communication process.
“Arm Wrestling #2 (Are you listening to me?)” involves a British speaker continuously correcting an English speaker with an Indian accent.

Anna Raimondo is a sound and radio artist born in Naples in 1981. She lives and works in Brussels.

A walk around la Goutte d’Or (Northern Paris) with a toy singing machine …what is she saying?

Dinah Bird is a sound and radio artist born in 1965 in London and lives and works in Paris.

The sound piece is the result of research about the word unreachable, in an attempt to communicate a completely unknown language. It creates a non-idiomatic language of the almost: Almost speech, almost nothing. Almost reach.
Renata Roman is a sound and radio artist born 1969 São Paulo; she lives and works in São Paulo, Brazil).
http://renataroman.tumblr.com/
——

Sajid Akbar is a sound artist , composer and multimedia professional who lives and works in New Delhi.
——

Consisting of three fictions, each tells the story of a woman.
Fiction 1: Yasmine, an interior woman, tells us her story, little by little, she takes us into her imaginary world. The text is inspired by the « Persiennes », a collection of poems by Bouanani Ahmed, Touda Bouanani’s father, filmmaker and writer.
Fiction 2: A fortune teller tells her story through a Moroccan-Spanish card game, Ronda.
Fiction 3: « Réflexion dans une cour », extract of an oriental journey of Isabelle Eberhardt, with « exile song » collected and sung by Taos Amrouche.

Touda Bouanani is a visual artist born in Morocco. She lives and works in Rabat.

This audio was translate to Spanish in June, 2015. Originally this video-art was made in Norwegian in 2014 to the project “No country for women” that aims to show that unfortunately there is not country where women are completely safe.
Strategies wants to visualize all the energy, effort and time that girls and women invest every time they want to go out.

Jeanette Mauricio is an activist and a radio artist born in Peru (1980) and currently lives in Norway.

Curated by Francesca Masoero
“Fluid Roots” is a multidisciplinary project that combines a photographic and an acoustic research over the encounter with the water element, and specifically with the Belgian sea, from the perspective of a migrant newcomer in Northern Europe, the artist. The project provides an entry point for reflection over identity sharing, the fluidity of the contemporary migratory condition and the definition of commonality between different communities living in a same country (text Francesca Masoero).
Riccardo Bergamini, photographer, sound artist and director of Maison Bergamini. Born in Rome in 1953, he lives and works in Brussels.
www.riccardobergamini.com
——

A collaboration with ASMR practitioner Olivia Kisser, the piece was originally made for Tate Britain’s Sonic Trails programme. The work features Olivia improvising with household materials whilst recounting memories of diving and deep water swimming.

Dan Scott is an artist, cultural worker and researcher in sound and listening. He was born in London in 1978. He is based in Margate, Kent.
www.danscott.org.uk
Olivia Kisser is an artist currently lives and works in Costa Rica.
——

Presença de Ulises (The Presence of Ulises) is an assemblage made by sighs, fluids and pulse from an old watermill, surrondings, and the music « Amanecer ». It is based on a sound archive specially captured to inspire the musician, composer and sound artist Ulises Ferreti before his death in october 9th of 2014.

The sea is the main character of the piece by Anna Raimondo entitled « La Vie en Bleu » (Life in blue). The sea is a strange variant of the radiophonic ether with its continuous wave-cycle, capable of creating pathways and connecting distant places. In this case, the two marine cities of Naples and Marseilles. They become the terminals of a radio bridge that extends under the water. Is the sea a primordial form of radio? Just think of those animals that communicate at very great distances in the deep oceanic waters, sending signals to be carried by the motion of the sea. This piece invites us to tune in to this sort of underwater radio. Becoming-whale. Becoming-dolphin. (text by Stefano Perna)

Radio Recall is a meditiation on radio technology, memory and obsolescence as a point of renewed potentiality within a post-digital era. Interviews are interwoven with a musical composition by Jim Backhouse. Initially made as a radio installation it has been mixed for conventional broadcast.

Magz Hall is a radio artist born in 1969 in Canterbury, she lives and works in UK.
https://magzhall.wordpress.com/

Talking Dogs presents an interaction with dogs from the neighborhood where I use an unknown language – barking – to induce canine reactions to my repetitive imitation.
Pedro Gallego is a visual and asound artist born in 1988 São José dos Campos; he lives and works in São Paulo, Brazil).
www.pedrogallego.weebly.com
——

Late 2013, an Eiffel Tower was installed in a roundabout in the city of Fes. Later, it was abducted. How an object contains the collective insconscious? What is it that the society declares as an art work? How each individual perceives this object? Object of another culture, copied from the former settler …

Ghita Skali is a visual artist born in 1992 in Casablanca. She lives and works in Nizza, France.

Rope Pulling is a 10:55 min sound piece using self-recorded waves of the Urban of Alexandria. The sound demonstrate our opinions on the tension of the city. By sounds of the space we could explore the motion of the city, and to have a different perspective of the concept of Resistance.
Khaled Ossama Kaddal is a sound artist and composer born in 1987, Alexandria, EG. He lives and works in Alexandria.

A ball of my hair flies through the air, up on its way to Montmartre.

Dinah Bird was born in 1965 in London and lives and works in Paris.

Thanks to Stefano Perna for radio broadcast technology.

Mefite is an Italic Goddess venerated in central and southern Italy, especially in the Irpinia Region. Goddess of fertility, she presides over the passage from life to death. Tremendous Goddess who has her cult-place located in the Ansanto Valley, the mortal moat, where horrible gas emissions coming out from a cave kill who goes too close, carried by the wind. A mortal air that governs the complex articulation of this cult: to ingratiate the Goddess it is forbidden to come too close to her, because you could die; to go through the Netherworld, instead, the same caution is requested, because the Death could enter the lungs before the way through is reached. Death that hits without a single touch, carried by the air as if it was sound or radio waves. An air that challenges, as to give the opposite of what you desire, that invites us to move forward, towards the unfathomable zone that divides Life and Death.

SEC_ is an Italian electro-acoustic musician, improviser and composer, he lives and works in Naples.
www.toxorecords.com/sec_

The work is part of a series entitled Beatnik Project. This project is developed since 2007 and approaches performances that seeks for the concept of “spoken word”, a relation between music and visual arts. It propose different kinds of texts vocalizations from diverse nature and authorship.
Bruno Mendonça is an artist, independent curator, researcher and teacher born in 1985 São Paulo; he lives and works in São Paulo, Brazil).
http://brunomendoncaarte.tumblr.com/
——

U.S.O. presents a range of frequencies close to ultrasonic threshold: an abstract experiment for the spatial ratio of mind and sensorial displacement.
Thiago R is a sound artist, studying the properties of sound as sculptural element, researching different relationships of sound in contemporary art. He was born in 1981 in São Paulo; he lives and works in São Paulo, Brazil).
http://thiago-ruiz.blogspot.com.br/
——

A metaphysical and didactic Radiodrama where Science meets mystery. Has the nature of Electricity been discovered? It’s hard to say, given that the personality of the two characters is clearly split into different hemispheres.
Cane CapoVolto is a collective founded in 1992 in Catania, Italy.

Recording from the handling of electronic devices generators, sounds and processors constructed by hand. An investigation between spatiality and the body.
Luciene Lamano is an artist born in 1967 São Paulo; she lives and works in São Paulo, Brazil).
http://www.lucienelamano.com
——

Concerto para Cocho, 2014
Marcelo Armani
Experimental music, 3’55”
This is a piece composed of sounds and noises produced with a violin bow to “play” the edge of a metal roof in this rural constructions used for livestock feed.
Marcelo Armani is a sound artist and electroacoustic/improviser musician represented by the Spanish label Luscinia. He was born in 1978 in Carlos Barbosa; he lives and works in Canoas, Brazil.
http://marceloarmani.weebly.com/
——

Urban ritual performed in Athens and in August in Jerusalem in collaboration with the National Palestinian theatre in Jerusalem.
Sonic Oedipus involves the collective voice of the city who dares to speak up an uncommon syntaxes of the myth of Oedipus (performed by citizens).

Despina Panagiotopoulou was born in 1977 in Athens. She is a theatre director, she lives and works in Athens (Greece) and Mexico.

The work resumes, acoustically, Maison Bergamini, a project started in November 2014 by the Italian photographer Riccardo Bergamini and by Francesca Masoero, with the collaboration of a variety of friends and actors of the cultural and artistic scene in Belgium.
——

Remix of Elisabeth’s Valletti piece « Harp Haikus » (live at Trianon, Paris)
The idea is to explore the link beetween sound and nature (harp is considered in many cultures as a cosmic tool), and ideally give a glance at the nature of sound itself. Made with « Paul’s Extreme sound stretch » (licence GNU – General Public License v.2).
Special thanks : Elisabeth Valletti.
Dominique Balaÿ was born in 1968. He lives and works in the south of France.
http://websynradio.fr/
——

Simulations soundtracks of terror, built from personal harassment and physical violence stories. These stories are unintelligible and supplemented with inserts of electronic sounds and noises altered instruments, directed to cause concern and fear.
Leticia Rita is a sound artist born 1973 in São Paulo; she lives and works in São Paulo, Brazil.
www.leticiarita.net
——

Sajid Akbar is a sound artist, composer and multimedia professional with a career spanning over 10 years within the creative arts.
——

Started in 2014, Maison Bergamini is a centre for photographic exhibitions, video and performing arts, but also for cultural events and critical debate over societal issues. It is a non-profit, public adventure, open to anyone who loves arts, aspires to engage critically in it and desires to amuse himself through it.
The team – Riccardo Bergamini, photographer, sound artist and director of Maison Bergamini. Born in Rome in 1953, he lives and works in Brussels. He is founder of the Riccardo Bergamini Photography – a photographic production company – and of Maison Bergamini – an art and cultural space.
Francesca Masoero, art project manager, critical researcher and curator. Born in Torino in 1990, she lives and works between Brussels and Marrakech. Francesca co-founded Maison Bergamini and collaborates with a variery of artistic projects – particularly Mòsso in Brussels and Le 18 in Marrakech.
www.maisonb17.org

Le Cube – independent art room based in Rabat, Morocco is a space of action, research and experimentation without compromise; a laboratory to support young contemporary artistic creation. Both an exhibition space and residency, it is a meeting place to establish a dialogue between artists and a variety of audiences.  Created in 2005 as the brainchild of Elisabeth Piskernik, Austrian art historian, to provide an alternative, non-profit venue, Le Cube has become an important platform for both Moroccan and foreign artists. Since its foundation, the space has contributed to the emergence of several generations of artists and has become one of the essential actors in the contemporary art scene in Morocco.

BASE-Moinho is a residence in an abandoned watermill dated from the end of the XIX century in the south of Brazil and dedicated to audiovisual experiments and visual arts projects.

Center of experimental music and sound art based in San Paulo.
http://www.ibrasotope.com.br/