SPILLOVER
Spillover is an audio track, consisting of four chapters, whose sounds were organized to fit into a 7-minute loop. The four chapters are titled after the first exercise in the four weeks of prayers in St. Ignatius of Loyola’s Spiritual Exercises.
Spillover is part of a larger piece including sculpture, video, and performance. A choreographed a dance accompanies this soundtrack as well as a dress that is very layered, sort of like a Victorian mourning dress. The top layers of the dress are black fabric, the underside layers are tan fabric, to match my skin tone. I will be dancing a 7 minute dance to the 7-minute looped Spillover audio repeatedly until my body can’t stand up anymore.
The result of this performance will be a highly edited video, showing the fabric switching from black to tan and showing that my body is slowly, failing. The video will have headphones nearby as an option for the viewer to hear the audio. Opposite this projected video, will be another projected video of me doing the same 7-minute dance to the same Spillover audio track, but inside the Prince sculpture (image provided). Because my body will be constricted by the sculpture’s weight and its material inflexibility, the movements will resemble something like a crude cartoon figure moving. The videos of each character, The Prince and myself, will face each other. This alignment with purposeful separation represents two things that were designed to be as together, but that inevitably will never sync up.
I titled the Soundtrack Spillover to refer to a term used to describe rapid ritual dancing (such as Sufi dancing). In Eugene d’Aquili and Andrew B. Newberg’s book, « The Mystical Mind; Probing the Biology of Religious Experience », its describes what happens to one’s arousal system when performing a rapid ritual:
» …One can see a bottom up process with rapid external rhythms driving the arousal system. We hypothesize that the rapid external rhythmic drivers would eventually lead to a release of hippocampal inhibition on arousal centers in the brain. This would result in an increased arousal drive via the amygdala and cortex. This process continues until maximal arousal occurs, which, as mentioned before, leads to spillover and quiescent breakthrough. »
I organized the sounds to relate to how I formally weave abstraction within specificity when I am fusing forms into a single surface shell (such as in the sculpture, Mary). 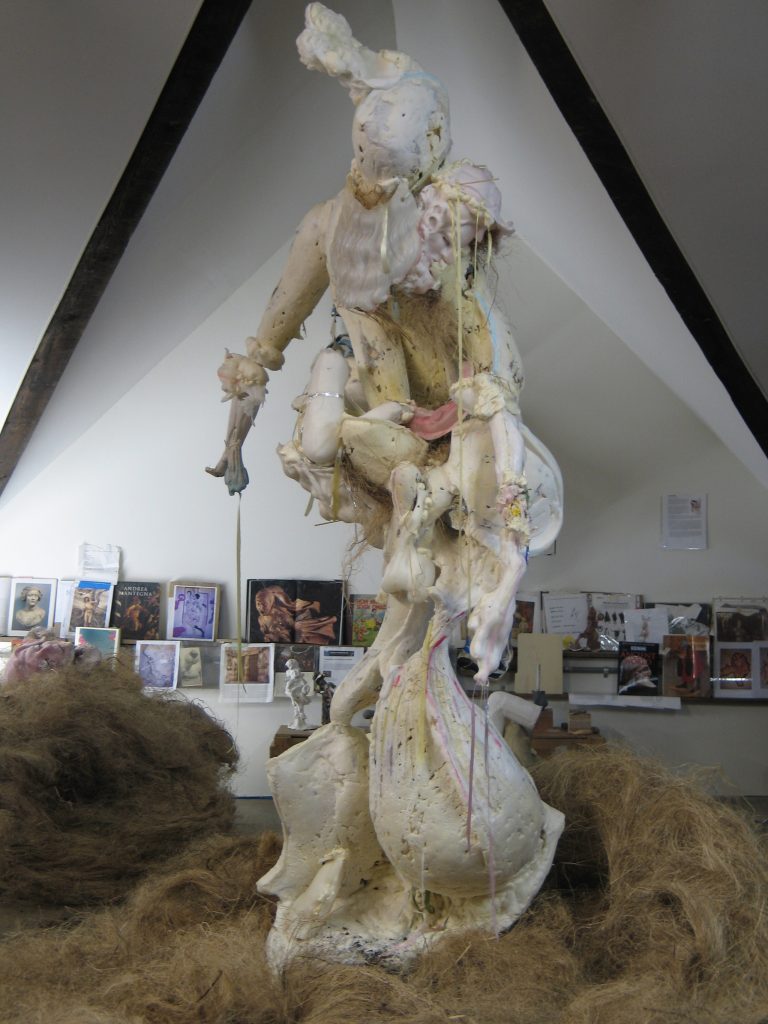 Prince
Cardboard, expandable foam, microcrystalline wax, ribbons, potting soil, make-up, help fiber, plastic, plaster, wood, steel, fake eyelashes, glitter
93x46x56 inches
2008
This version of the Prince fusion is a hollow form, built for me to perform in. I translated Spiritual Exercises (a prayer written by St. Ignatius Loyola that Bernini read daily at the end of his life) into dance steps. A seven-minute video records me performing this dance without the Prince armor on. This summer, I will be performing the dance with the Prince armor on top of me, and documenting it with another seven minute long video. Both videos will be projected facing one another to refer to dance partners who inevitably do not sync up. 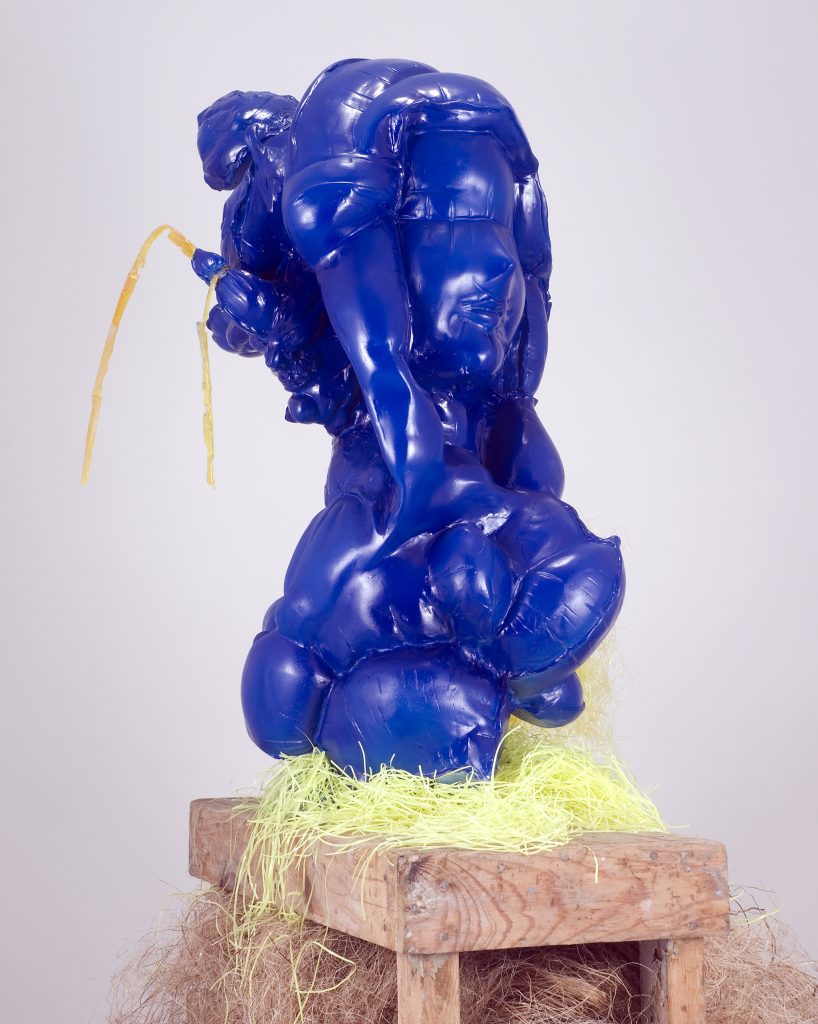 Mary (detail: example of “vice surface” in the Seven sculptures)
Hydrostone, bondo, autobody paint, steel, wood, tinted plastic, Easter grass
37x16x18 inches
2010
Interested in the state when a form that may appear to be full of life begins to deflate under a life’s pressure, I often think of gestures that reflect an internal or external imprint. With the sculpture Mary, I wanted to make a hard cast look like a thin inflatable skin. This sculpture was cast in a fine cement, grafted to nine other molded sections, and sanded 40+ hours to negate the concrete’s inherent surface quality. From one side, Mary looks like a form contained with air. As one walks around its skin, it reveals itself as a hollow structure. 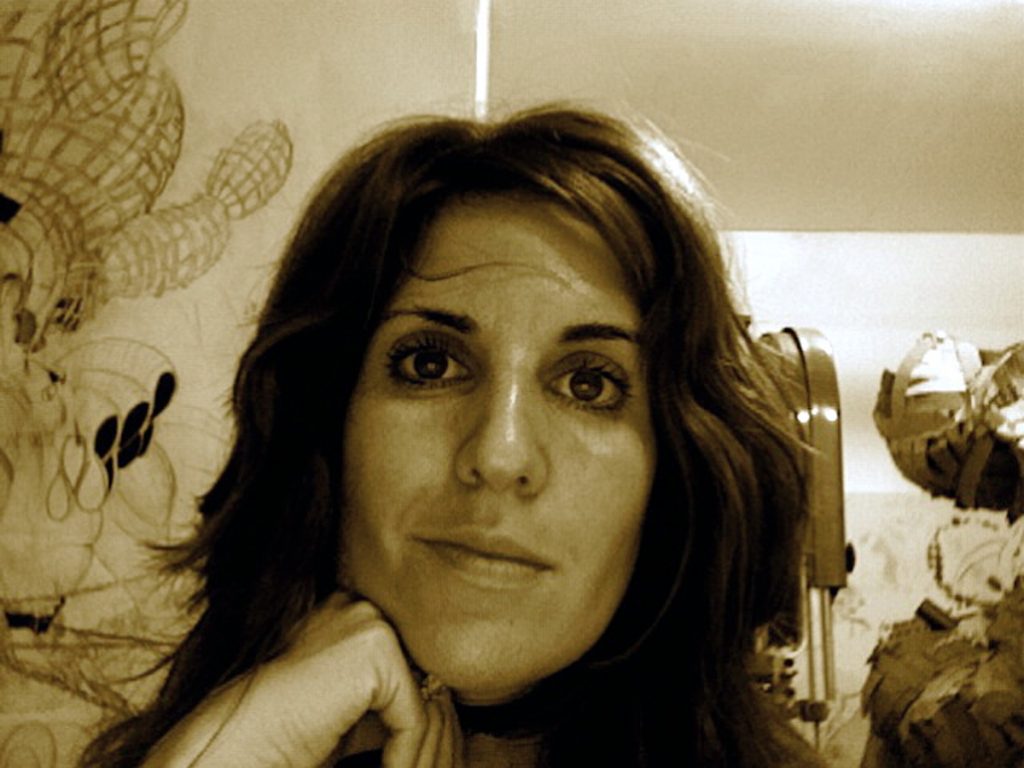 Bonnie Collura,  assistant professor of art at Penn State University, received her BFA from Virginia Commonwealth University in 1994 and her Masters of Fine Art, concentrating in Sculpture, from Yale University in 1996. Upon graduating with her MFA she has been in numerous solo and group shows in New York, Germany, France and Italy. Her work has been reviewed in The New York Times, Art Forum, Art in America, Art News, Sculpture Magazine, BOMB magazine, Beautiful Decay, Time Out New York, and several other publications. She has been awarded The Emerging Artist Award in 1997 from the Aldrich Museum of Contemporary Art in Ridgefield, Connecticut, received a Guggenheim Fellowship Award, for Sculpture, in 2005, was awarded a MacDowell Colony Fellowship in 2010, and is a current nominee for a 2010 USA Fellowship in the Visual Arts Category (recipients to be announced in December 2010).
www.bonniecollurastudio.com