All the works included in this websynradio’s program are inspired by the city of Glasgow, Scotland. Most include field recordings, and all evoke or respond to different aspects of this vibrant and complex city through sound – sometimes captured directly, sometimes altered, composed, or performed for poetic effect. It is intriguing to find that many of these pieces, even as they respond to immediate, present experience, happen upon the layered resonances of history and memory encountered throughout Glasgow – from its Victorian buildings to the accents of its voices. Many thanks indeed to the composers/sound artists who contributed their work and the accompanying notes. 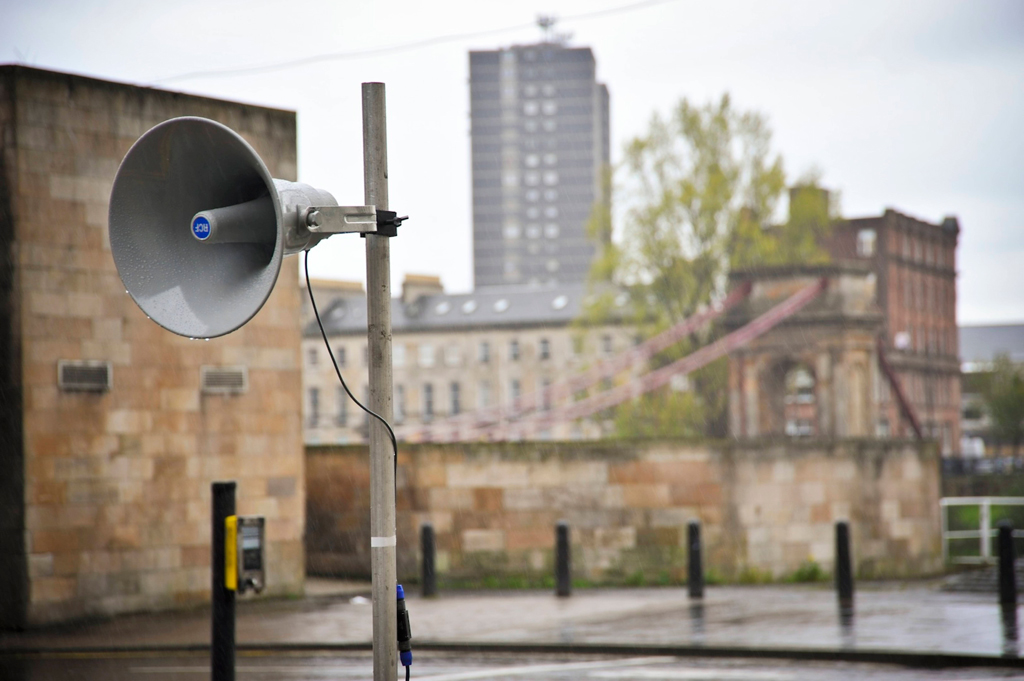 Lateral (11’15) – Nichola Scrutton (www.nicholascrutton.co.uk)
Sounds of river water, spoken names of places, information from tidal charts, and pulsing radio signals
serve as aural signposts, rooting Lateral in the real world. But the flow of water and rhythms of a vocal
landscape contribute to a sense of multiple, metaphorical spatial and historical resonances, and to ideas
of flowing with and against the current.
Lateral was originally commissioned as a site-specific work for High-Slack-Low-Slack-High – a suite of
audio works curated by artist/researcher Minty Donald for Glasgow International Festival of Visual Art
(2012), in which five artists were invited to respond creatively to the tidal River Clyde that runs through
the heart of the city. The Lateral installation/performance took place at the bottom of Dixon Street,
Glasgow – a major thoroughfare that leads from the city directly down to the river. Subsequently, I
recreated the original work as a fixed composition.

Final Times (5’04) – Alistair MacDonald (www.alistairmacdonald.co.uk/)
Final Times is a short piece of “cinema for the ears” based on sounds I recorded in the Scottish city of
Glasgow where I live and work. It is a vibrant city and the piece uses some of the sounds that I carry
around in my head. We hear people moving about in cars, buses, trains and particularly the Subway
whose sound is unique. There are voices with distinctive local accents (the title of the piece is heard in
the shout of a newspaper seller), a football crowd, a pub and more intriguing sounds like the rhythmic
clicking of an escalator in the huge, Victorian railway station. Sounds and the images they suggest are
transformed, and their juxtaposition and layering makes new meaning. The clicking of the escalator
becomes a train rattling on rails; voices are stretched into the hum and squeal of the subway train, which
returns in the sound of a distant bagpiper on the street, shimmering like heat haze. Final Times was
commissioned by the BBC in 1998 as one of a series of pieces relating to particular places in Scotland.

Post-Industrial Broadcast #1 (9’39) Nichola Scrutton
Post-Industrial Broadcast #1 (2013) portrays a fictional place or state in a process of transformation.
Inspired by Glasgow as a great post-industrial city, the piece draws from a range of source materials
including hydrophone (River Clyde) and contact microphone recordings, a radio, the human voice, twoway
radios, and an oil radiator. Compositionally, the piece unfolds in a wave-like structure. Subtle
sounds of water emerge and recede giving a sense of constant flow, while sheets of sound – long, loosely
articulated sound gestures – are agitated and interrupted by unpredictable micro-collisions and
interference, with hints of human presence. Post-Industrial Broadcast #1 won the 2013 International
Alliance of Women in Music Pauline Oliveros Award for Electroacoustic Media.

Interlude (10’08) – Bethan Parkes (www.bethanparkes.net/)
Interlude was created from recordings made in a tunnel underneath a busy road in Glasgow. The tunnel
runs parallel to a river and perpendicular to the road above, both of which present bounded, directional
fields of flow. The tunnel itself invites a passage through – in the darkness, the light from the other end
offers an irresistible draw, and the path, which the stone structure encloses, has its own sense of
directionality. However, the acoustic qualities of the tunnel contrast with these linear spatialities: the
acoustic reflections are everywhere – a broad, multi-directional field of sonic feedback, which rounds
out the traffic sounds from above; explodes the linear passage of footsteps and voices; and distances and
smoothes the flow of the river into a rush of dampened white noise that hovers in the darkness.

Aria for Voice and Plastic (4’41) – Nichola Scrutton
The two-part composition Aria for Voice and Plastic/Aria for Breath and Glass was created for a concert
presented as part of the citywide Charles Rennie Mackintosh festival held in Glasgow in 2006. The
inspiration for the two Arias came from two small mixed-media panels, Opera of the Winds and Opera of
the Sea, created about a century earlier by Scottish artist Margaret MacDonald Mackintosh. After
studying these finely symbolic visual works my thoughts turned to three main issues: debris, materiality
and cycles. Each Aria explores an interaction between human vocal expression and mass-produced
materials used in everyday life.

Non-Members Night Out (21’50) – Mark Vernon (www.meagreresource.com/)
A number of years ago I suffered from a bout of prolonged back pain. Bad reactions to the high doses of
pain killers meant social drinking was out of the question and combined with the inability to stand for
longer than 10 minutes without excruciating pain this began to seriously curtail my social life. On the
odd occasion I did go to the pub I would invariably leave after an hour or so. The pubs, karaoke bars and
clubs became symbols of my exclusion. It was around this time that I began making recordings of the
outdoor nightlife on my weekly shadowy walks. I was drawn to the back doors of clubs, deserted alleys
behind bars, non-places where the filtered bass of the discotheque made the sense of isolation more
palpable.
This soundscape, created with sounds familiar to anyone used to prowling the streets of a big city late at
night, features surreptitious recordings made outside Glasgow nightclubs, skulking around back doors
and fire exits in the early hours of the morning. Despite the obvious presence of others these sounds are
strangely isolating. They document only the exterior, the periphery. The listener is excluded from the
exciting and lively atmospheres that can be heard at a distance through the barriers of closed doors, brick
walls and back alleys. You can hear the party going on but you haven’t been invited.
These recordings also document the effects that high volumes of music and the city’s club culture have
on the surrounding architecture and acoustic environment. A doorframe rattles in time, but at a slight
delay, to the music within. A closely miked recording of a broken but intact windowpane at the rear of
one club makes the grinding together of the shards of glass audible as they vibrate in time to the bass.
Microphones inserted into drainpipes amplify the audible white noise content creating warm drones;
filtered higher frequencies from the music and sounds from outside are still just audible. Windows rattle
in their frames under an assault of bass heavy music.
All of the acoustic effects in this piece are natural; this is a simple edit and arrangement of the untreated
field recordings.
Abridged versions of this piece have been presented at ‘Carte Blanche’, Vollevox, Brussels and ‘The
Audible Picture Show’, on ‘Framework’ (Resonance 104.4FM) and Radio Deutschland. An edit also
appears on the Vernon & Burns LP, ‘The Tune the Old Cow Died of’ (Gagarin Records). All recordings
made in Glasgow city centre over the summer of 2001. Produced by Mark Vernon.

Southwest, Outward (Sleep Tight) (6’24) – Luca Nasciuti (www.lucanasciuti.com)
To be released as part of the Tiny Portraits project on Flaming Pines (www.flamingpines.com)
The sound recorded outside the Strathclyde distillery in Glasgow has been used in the composition in
relation to the sense of smell that pervades the area day and night. Very much like the east end of
Glasgow it is the smell that gives a unique identity to the area even more so according to the direction of
the wind. Normally the wind blows north-east but occasionally the current drives south-west and it is in
this occasion that I can feel the smell in the air getting into my flat.
The recording of the site is very much mechanical; a massive air conditioning fan, water sprays and other
machinery dominate the site. But interestingly, on the day of recording an open air rehearsal for the
World Pipe Championship took place just across the river in Glasgow Green and this leaked through the
soundscape of the distillery.
I’ve decided to feature the bagpipes in the piece just as a stereotypical reminder of place, almost as a
joke – the distillery itself is another reminder of a national identity shaped around tourism.
I was interested in exploring the air, the current: the slow invasive power of the smell that becomes so
much part of the landscape in the east of the city. A smell you can even feel coming in, through the
windows at home, in the streets and alongside the buildings. Along and within, as a broadband noise
indistinguishable, but yet a sound world that makes its way in the listening experience and forces
recognition, understanding, questioning and acceptance.

At First Light (8’49) – Nichola Scrutton
Arising from a recent, ongoing strand of exploration around ideas of impermanence and the ephemeral,
At First Light, a vocal meditation, was inspired by the play of light at sunrise in my flat in Glasgow and a
notion that each moment may be filled with the past, present and future. The process of making the piece
involved repeated exploration of the material using a simple MAXMSP patch, with the final work being
created in a single real-time improvisation. While a version of the piece was ultimately fixed to become
At First Light, inherent in the process and the material itself is an idea of transient evolution – emergence,
cycle and decay.

Nichola Scrutton, curator: I am a freelance composer and sound artist based in Glasgow, Scotland. I studied at University of Glasgow, completing a BMus, an MMus in composition, and a PhD in electroacoustic composition and voice funded by the AHRC (portfolio: Hearing Voices, 2009). My workspans a range of self-directed projects and interdisciplinary collaborations. Some ongoing interests are at the core of my sound art/composition practice: the association with place and space through field recordings; sonorous voicescapes (expression, words, extended techniques); improvisational processes, often using interactive technology. More recently, I have started to slow down the creative process by incorporating contemplative practices and engaging with different artistic media to open new perspectives on my work in music and sound. www.nicholascrutton.co.uk